From May 27 to October 7, 2011, April and I departed our beloved Portland for several months and rode eastward across the continent!  We intended to get all the way to the East Coast, but due to lack of funds, tiring of the road, and impending crappier weather, we stopped in Chicago.

Why?  I had been wanting to do something like this for awhile. It was inevitable for the amount of touring I've done since 2005 to want to accomplish a cross-continent tour!  Plus, I wanted to check out some interesting places along the way, some I've been to before, some I haven't.

The tour is also part of a grand project/idea I'd been mulling about for a few years.  I wanted to record "bike culture" in various cities and locales across the United States and Canada.  We blogged about it here and on April's blog, but will be putting it together in a print form sometime in the next year or two.

Where?
The rough outline of the route:
For more details on our itinerary, check these out:
The Trip: Why we're going to where we're going, Part 1
Why We're Going Where We're Going: Part 2

You can also see the map of the route here: Click here to TrackMyTour!

You can read more about the tour by checking out my Cross-Con Bike Tour entries. And check out my photos on flickr! 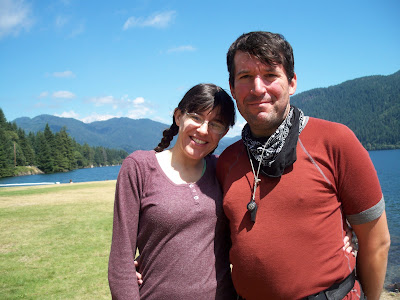