Man, it's almost NEXT weekend and I'm writing about last weekend!
The weather couldn't have been better for my first bike camping excursion* of the year.  (Okay, I did "bike camp" over New Years, but it was cabins, so I don't think it counts.)  Sunny, high 60-70F both days.  The only bad thing I can say is my lack of preparedness.  Rather than smartly pack the night before, I threw everything into panniers on Saturday morning.  Now this wouldn't be so bad if I was doing a solo expedition or riding with April, but when I'm leading a ride...let's say there were some antsy people waiting at the Cleveland Ave MAX station (the ride "muster point") when I arrived twenty minutes late!
The crowd was twenty strong, a good turnout.  We headed eastward for a few miles through the suburban vestiges of Gresham until we hit the true countryside at the Stark St. Bridge.  The next few miles after that was spent climbing up the Historic Columbia River Highway until we got to Women's Forum, the high point.  We broke for an extended lunch since there was a crew dealing with flats that were miles behind.  The next stop was Crown Point/Vista House, nary a mile beyond.  Some people were getting antsy again, so they decided to form a "forward" team and ride onto Multnomah Falls, about 8 miles down the road.
After Crown Point, it was a quick stop at Latourell Falls, then a push onward to Multnomah Falls.  Since it was mid-day on a beautiful spring Saturday, the Falls were crawling with people!  Supposedly right before we got there, a car hit another bicyclist (not in our group)** and paramedics had already taken off.  Yeeps.
It was a short hop to Ainsworth State Park, the campground.  We madly scrambled for the Walk In Sites.  Though there are plenty of open grassy tent sites and RV pull-throughs, there are only 6 "primitive" walk-in sites.  And since the walking-in part is pretty short, they tend to get their fair share of car campers.  Unfortunately only half the walk-in sites remained, so we played a great game of  "How can we fit more than twenty people*** into three campsites?"  Somehow, we managed to pull it off.  One campsite had NINE tents!  Thankfully I lucked out**** and picked C-6, which could only fit three tents. 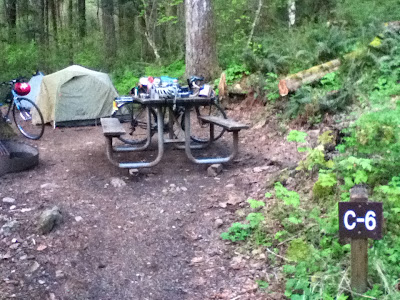 This was the first trip where I got to try out my new tent and sleeping bag, and the replaced Big Agnes air mattress.  I'm going to go in more detail on a future post, but right now I'll just say they worked fine!
After breaking camp, some folks rode to Horsetail Falls to go on a hike. Todd Boulanger and myself rode further east to explore the "towns" of Dodson and Warrendale. "Towns" is being generous, since they were simply a collection of houses. The town part faded years ago, probably due to the continual automation of railroads.  What did we learn on the expedition?  That Dodson and Warrendale don't want us there.  Okay. 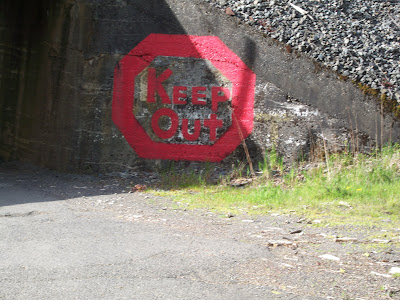 The usual "hang around the fire" bizness was had during the eve.  Though the plan was to ride back to Portland simply the way we came, somehow I wasn't satisfied.  We had only done 25 miles to get from Gresham to Ainsworth.  The weather was beautiful and this was the only time I'd be out this way this year.  I proposed riding home the long way: travel further eastward on the Historic Columbia River Highway (and a small section of I-84) to Cascade Locks, cross the Columbia River at Bridge of the Gods, and return westward via the Washington side.  To my surprise, I had a couple takers!  Chris and (name forgotten)***** decided to come along.
The ride home was good, if not tiring.  Taking "the long way" not only meant double the distance (50 miles), but also meant more traffic, as Washington Route 14 sees a lot more traffic than the old Columbia River Highway.  Thankfully the traffic wasn't so bad (lotsa motorcycles though), but the shoulder is narrow in places and there's more than a few trucks (including the Milky Way truck that buzzed us pretty close)  There's not as many attractions on the Washington side besides Beacon Rock and Cape Horn, which is a big long climb up to about 900 feet in elevation.  The view from the top is magnificent and well earned!
But man, did the sun and riding wear me out!  I went to bed at like 8:30 pm. I haven't done a ride like this yet this year. Hopefully I'll get into shape on tour.  Otherwise...
*Or if you are of that particular persuasion, "s24o".
**The road was infested with roadies!
***There were several latecomers who weren't part of the initial group.
****Actually, luck has nothing to do with it.  I got to the campground first and knew C-6 was the best site.
*****Sorry!
Posted by adventure! at 5/05/2011 12:01:00 AM