Hello friends! Yep, another new series. Here I'm going to talk about various items of gear that I've had for a bit, and give my thoughts on them after several months/years of use. Hope you enjoy! Today I'm going to talk about my Esbit Kaffeemaschine, aka Coffee Maker. You may have read my review of it when I initially got it. In fact, I'm pretty sure that you've read it, as it is now my most popular blog entry ever, finally (finally!) topping the piece about urban parrots and peacocks I did way back in 2005. (I still get comments on that one!) Anyways, after five months of use, I felt it was high time to revisit my review, because there's nothing worse than online reviews of outdoor products where the reviewer brings their item home from REI/MEC, tests it once in their living room, and feels compelled to write a glowing review. Because that ain't "real world" experience, my friend.

I've used it frequently on camping trips since I got it in April. And yes, I still like it. But as with any product, there are pros and cons. Let's go through the pros first. 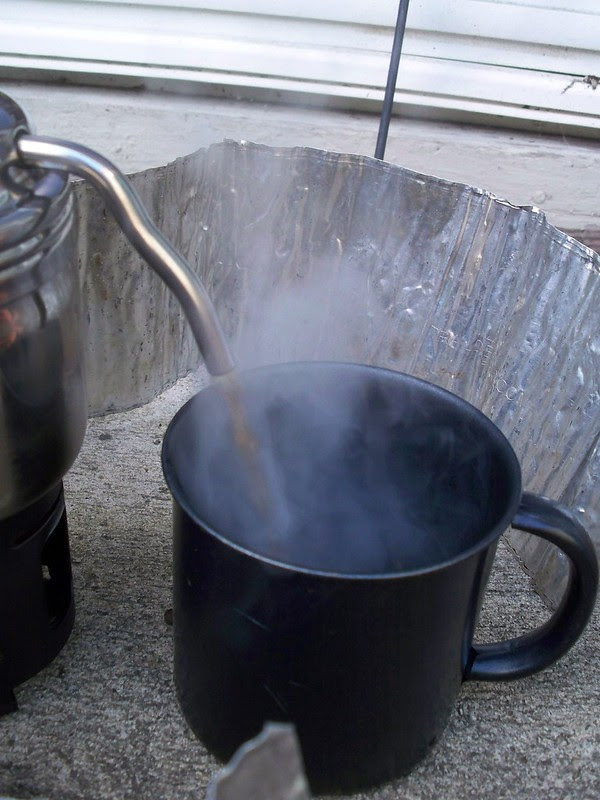 And here are the cons:
If I were to give it an overall rating, I'd rate the Esbit Kaffeemaschine three and a half out of five stars.

After all that, you must wonder, "when do I use the Esbit Coffee Maker?" I pull it out for overnight bike camping excursions, because on a short trip I'm not overly concerned with how much stuff I bring. I'll also bring it when April and I camp or tour together, as we can divvy up camping equipment. Plus, having a dedicated coffee maker means we free up the Trangia for other things (like making pancakes), meaning less time making breakfast.

And yep, I'll be using this nifty gadget in the months and years to come. I would like to make a small soda can stove that will fit in the unit, so I can use alcohol instead of Esbit tablets.

If you are interested in finding one, I got mine from Sierra Trading Post. They currently have the best price that I've seen ($22.50 plus shipping/handling), though I got mine for only $12.50. (Must have been a fluke in the pricing?)

*I put "espresso" maker in quotations because no stovetop espresso maker makes true espresso. Yes, the coffee is strong and espresso-like, but is not true espresso as it is not extracted at a high enough pressure.
**One complaint that some have made is that the unit is hot to touch and one can't make another cup of coffee immediately after brewing one. Well, duh. You can't do that with a regular moka pot either. Another complaint is that the brewing time is "long". I've found mine can take five to ten minutes. Considering it takes about five or so minutes to boil water with the Trangia, I don't consider the brew time necessarily long.
Posted by adventure! at 9/19/2012 12:00:00 AM