The Raleigh Wayfarer Saga, Part 7: As finished as she'll be for now, and DYNO LIGHTING! 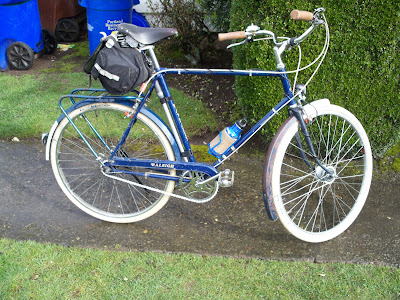 Tuesday after work I rolled myself and the Raleigh Wayfarer down to the Stephens Addition neighborhood* of SE Portland. There I found Mr. Raving Bike Fiend from the Great White North waiting for me. Today we were going to tackle the last major step of the Raleigh Wayfarer Restoration Project: mounting and hooking up my generator powered lighting!
But first, a couple of minor adjustments. Replace the 19 tooth rear cog with a 20 tooth, which reduced the "gear inches" by 5 inches, meaning the gearing will be lower than it was. Also, installation of a white chain to replace the original. And a "hack" on the rack: rings clamped on with hose clamps.  This allows for modern panniers with a bottom "hook" to be able to be securely attached to the rack.
And now for the lights!
I purchased two lights from Velo-Orange.  The headlight is a Spanninga Micro FF LED Dyno Headlamp with Safe Stop.  The tail light is the Spanninga Pixeo XS Fender Dyno Taillight with Safe Stop.  And I will freely admit, the reason I picked these two was because they were the most economical choice I could find, $42 and $20 respectively.  I know the old adage "you get what you pay for" definitely applies to dyno lighting.  But I have a budget to work with, and the Raleigh is intended as an around-town/"commuter".  When I get dyno lighting on the Long Haul Trucker, I intend to go for more fancy componentry.
And I know what you're thinking:** "Why didn't Shawn go for a more 'retro' light to go with the aesthetic of the vintage English 3-Speed?"  I did think about that, but all the ones I saw used Halogen bulbs, which are not as bright as a modern LED and suck up a lot of juice.  And the LEDs I've seen have a "standlight" function, where a capacitor will provide power for the light for several minutes after the wheel stops moving.  I'll take practicality over aesthetics, since this is supposed to be an everyday bike, not a show piece.***
I was hoping that the generator lighting installation would go smoothly, but of course it didn't.  The first and biggest hurdle was figuring out how to mount the headlamp.  The provided bracket is designed to mount to the front brakes.  The problem is the bolt that attaches front brake to fork is just long enough for its intended purpose, no extra room.  So Keith and I rode to the closest hardware store to get a longer bolt.  We got back to find out that the threading on the new longer bolt did not match the older bolt, due to the peculiarities of old Raleighs and their 26 threads per inch.
So as the day grew later, we rolled to a different hardware store that was still open.  Keith looked and looked for a serviceable bolt, but none was to be found.  In that moment of desperation, though, was a piece of brilliance from Keith, an appropriate mounting "hack".  We'd get two separate pieces of metal bracket, one smaller than the other, bolt it together, and the flat metal would be thin enough (but just barely) to fit onto the crowded brake bolt.  Problem solved! 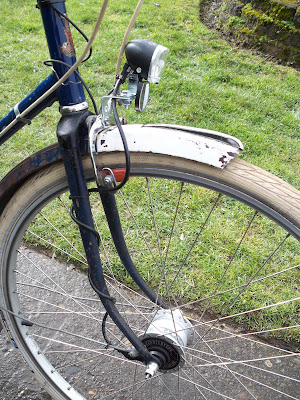 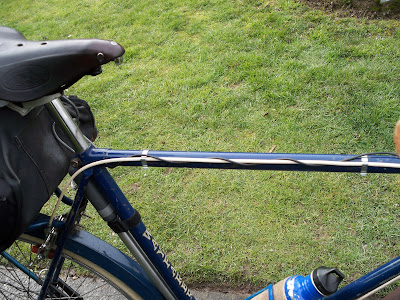 Everything connected, we spun the front wheel to test the rear light.  The front light was working, but nothing from the rear.  Crap.  Is it the light itself, or the wiring?
Keith tested the front light by connecting it directly to the dynohub, and it worked, so it was obviously the wiring.  After several troubleshooting steps, he figured out that we'd connected the wires to the wrong terminals, so a quick reversal and everything's working. 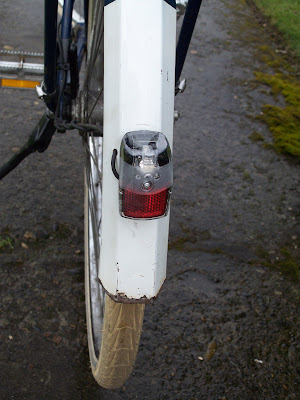 And now I have a bike with DYNO LIGHTS!
And how does it work?  Well, just fine, thank you very much.  I used the dyno lighting exclusively for the ride home.  The rear was bright and so was the front.  The light has a focused narrow beam, which isn't as wide as my EOS light on my helmet.  So I'd say it's fine for around town, but not recommended for trail riding or the like.  (The Over The Bars in Milwaukee blog has a nice review here.)  As for drag and vibration which is common with any hub generators, I didn't notice anything.  I'll give a more detailed review after a few weeks of use.
Maybe I didn't notice any drag since I put a new cog on the back.  The change wasn't super significant, it wasn't like the 2nd gear felt like the 1st or anything.  But it was significant enough, as the bike felt peppier!  Hills that I had to drop to 1st were now tackleable in 2nd.  Did I mention how much fun I had on the bike ride home? 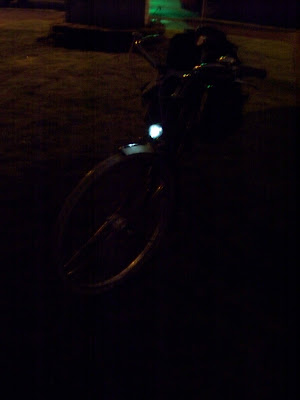 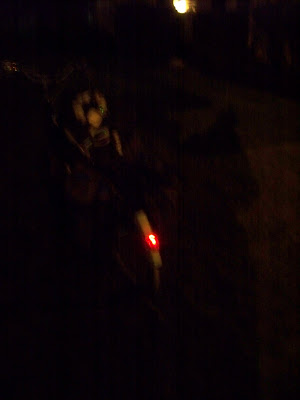 So now most everything is done.  There will be minor tweaks, but unless the rear wheel fails soon, there are no more major things that need to be done to my Raleigh Wayfarer.  I still want to touch up the scratches and repaint the rusted front fender, but that's all minor stuff.
And old Raleigh, you are a fine bike!
*See if you can figure out that one!
**Play along with me here.
***It won't be a showpiece with all those scratches.
Posted by adventure! at 2/24/2011 12:01:00 AM