Alright, alright, it's been long enough.  The suspense is probably killing poor Paddy Anne!
I've been alluding to "something big on the horizon" for the last couple months.  I've been talking about the need to save some money.  I'm talking about selling my beloved Centurion.  Heck, I'm quitting my job.
So what the heck is going on?
Well, first I can tell you it is NOT one of these scenarios:
Nope, none of those.
So what is it?
APRIL AND I ARE BIKING ACROSS THE CONTINENT THIS SUMMER! 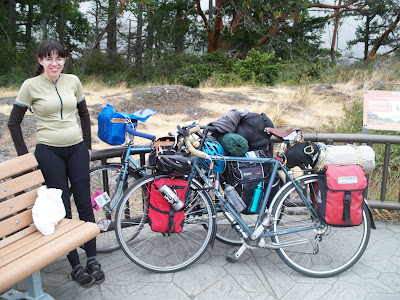 Yep, come Memorial Day, we'll be departing our beloved Portland for several months and aiming (generally) eastward across the continent!  Yes, we will be returning to Portland, but not until fall.
Why?  Well, I've been wanting to do something like this for awhile.  I almost attempted to pull a smaller-scale version of this last year, but life got in the way.  I think it's inevitable for the amount of touring I've done in the past six years to want to accomplish a cross-continent tour!  Plus, I wanted to check out some interesting places along the way, some I've been to before, some I haven't.
The tour is also part of a grand project/idea I've been mulling about for a few years.  I want to record "bike culture" in various cities and locales across the United States and Canada.  Not only do we plan on blogging about it, but I want to make a book-type-thing afterwards!
Where?
I'm going to draw up a fancier map soon, but here's a rough outline of the route.
I just got exhausted typing the itinerary!  And I feel crazy: Are we really going to attempt this?  Will we pull it off?  We hope so!
I will be talking more (lots more) about this trip in the coming two months before departure, going into more detail.
Would you like to help us out on this crazy quest?  Well, here's how!
Well, this is going to be an interesting year, and in turn, an interesting blog!  Hope you enjoy the ride!
Posted by adventure! at 3/30/2011 12:01:00 AM